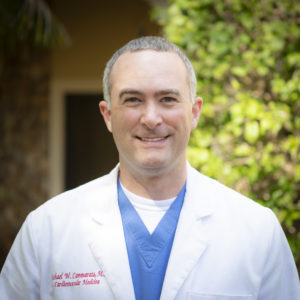 Dr. Cammarata joined Bartzokis, Rubenstein and Servoss, M.D., P.L. in 2017. He grew up in Southwest Florida and attended the University of Miami, graduating with honors in 2004 with a Bachelor of Science degree in Biology. He began medical school later that year at the University of Florida College of Medicine in Gainesville, FL where he was awarded the Jules B. Chapman Scholarship for academic excellence and humanism. He graduated in 2008 and began his internship and residency at the University of North Carolina at Chapel Hill in Internal Medicine. After completion of his residency, Dr. Cammarata spent a year as a hospitalist in Raleigh, North Carolina.

He started a combined research and clinical cardiology fellowship in 2012 at Wake Forest University – Baptist Medical Center in Winston Salem, North Carolina. While he was in fellowship he completed a Master of Science degree in “Clinical and Population Translational Sciences” through the Wake Forest University Graduate School. He published several papers relating to cardiology in addition to writing a book chapter on Hybrid revascularization procedures. He has presented multiple abstracts/posters at national conferences. He also completed the American Heart Association’s “Ten-Day Seminar on the Epidemiology and Prevention of Cardiovascular Disease and Stroke” in 2012.

He is currently board certified in Internal Medicine, Cardiovascular Disease and Interventional Cardiology and is currently practicing at Boca Raton Regional Hospital. He lives in Boca Raton with his wife and three children. In his free time, he enjoys spending time with his family and participating in watersports including SCUBA and swimming.