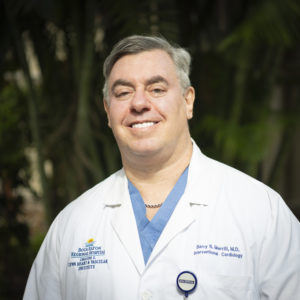 Barry S. Merrill M.D. has been practicing cardiology in the Boca Raton and Delray Beach area since 2002 as a clinical and interventional cardiologist. Originally based out of Delray Beach, he joined Bartzokis, Rubenstein and Servoss, M.D., P.L. in 2012. Dr. Merrill’s interest in medicine began early and he received an American Heart Association scholarship in high school and performed physiology research at NIH and the Uniformed Services University in Bethesda, Maryland.  He then attended Wesleyan University where he graduated with honors with a combined degree in biology and psychology in 1990. While at Wesleyan, he obtained a Howard Hughes research grant to perform cognitive neuroscience research on the human visual system. After college he worked at Johns Hopkins University performing molecular genetics research for a year prior to medical school. He then went to the University of Maryland for medical school and graduated in 1995. Dr. Merrill then completed an internship in residency program in internal medicine at Tulane University in New Orleans finishing in 1998. He then went on for training in cardiology at Rush Presbyterian St. Luke’s Hospital in Chicago. He then went for additional training to the University of Louisville in Louisville, Kentucky for interventional and peripheral vascular training for a year before coming to south Florida to begin his practice.

While at Delray Medical Center, Dr. Merrill took on several leadership rolls including Director of Echocardiography and played an active role on the Cardiovascular Committee and Cardiovascular Peer review. He currently holds an academic appointment as an affiliate assistant professor of clinical biomedical science at the Charles E. Schmitt College of medicine, Florida Atlantic University. He was a South Florida Super Doctor in 2008, 2009, 20011, 2012, 2013 and has received several other towards recognition throughout his career and most recently was physician of the month at Boca Raton Regional Hospital in February 2016. He is a fellow the American College of Cardiology.

Dr. Merrill resides in South Florida with his 2 teenage children in the Boca Raton area.