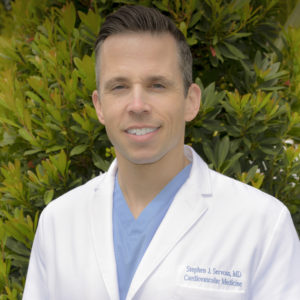 Dr. Servoss is a partner at Bartzokis, Rubenstein & Servoss, M.D., P.L.  Prior to establishing his practice in Boca Raton, Florida in 2006, he attended the University of Rochester for his undergraduate studies as the recipient of the prestigious Senator Robert C. Byrd award and Bausch and Lomb scholarship.  During his time at University of Rochester, he was recognized with several awards, including the Merck, Analytical Chemistry Society and John A. McCreary Awards for academic excellence, as well as the Carl A. Whiteman Award for excellence in teaching.  After graduating Summa Cum Laude in 1993, Dr. Servoss went on to attend Harvard Medical School.  While in medical school, Dr. Servoss spent one year performing research in developmental biology at the National Institutes of Health as a Howard Hughes Research Scholar.  After graduating from medical school in 1998, Dr. Servoss began an internship followed by residency in Internal Medicine at Massachusetts General Hospital (MGH), a teaching affiliate of Harvard Medical School, where he received the Harvard Medical School Resident Teaching Award.

In 2001, Dr. Servoss began his training in cardiovascular medicine at MGH.  In 2002, he received the DeSanctis Clinical Scholar Award in recognition of clinical excellence.  From 2003 to 2004, he was a fellow in Clinical Biometrics at the Brigham and Women’s Hospital (BWH), completing a Master of Science in Epidemiology at the Harvard School of Public Health and receiving advanced training in clinical trial design.  During this time as a Clinical Biometrics fellow, he worked at the Harvard Clinical Research Institute on the development of clinical research protocols geared toward FDA approval of carotid stent, percutaneous valve and patent foramen ovale (PFO) closure technologies.

In 2004, Dr. Servoss began his training in interventional cardiology.  Areas of expertise include angioplasty, coronary stenting, rotational atherectomy, directional cutting atherectomy, brachytherapy, use of distal protection devices, ASD/PFO closures, and percutaneous valvuloplasty.  In 2005, he went on to complete a Fellowship in Vascular Medicine and Endovascular Intervention at MGH, with intensive training in the medical and interventional management of carotid, renovascular, lower extremity and upper extremity arterial disease.  During his time at MGH and BWH, he published a number of research articles in major cardiology journals.  His research has focused on pharmacologic management of acute coronary syndromes, triggering of myocardial infarction, the potential association between migraine headache and interatrial communications, and the treatment of peripheral arterial disease.

Dr. Servoss has taken on several leadership roles at Boca Raton Regional Hospital, having served as Medical Director of the Cardiac Catheterization Laboratory, Vice Chief of the Department of Cardiology, and Co-Director of the Percutaneous Valve Therapy program.  He has also served as a member of the Credentialing, Physicians Advisory, and Advanced Technology Committees.  He holds an academic appointment as Affiliate Assistant Professor of Clinical Biomedical Science at the Charles E. Schmidt College of Medicine, Florida Atlantic University.  Shortly after his arrival in South Florida, Dr. Servoss was named “Best Doctor” in the 2007 “Best of Boca” edition of the Boca Raton Times and has received numerous awards in recognition of outstanding patient care since.

Dr. Servoss resides in south Florida with his wife, Julie Servoss, M.D., M.P.H., Associate Dean for Diversity and Inclusion at the Charles E. Schmidt College of Medicine, Florida Atlantic University and his children.